Earning a certification in any of the recognized Oracle technology or level such as OCA or OCP can be a great kick start to your career. More than 80% of OCP certified professionals have reported an increase in their salary and growth in their careers. Oracle technologies are being used on a large scale in many industries these days. Learning these skills will help you in career growth.

The Oracle certificate program is divided based on regulations like database administration and application development. The levels of certification include

Along with this, the Oracle Specialist (OCS) and Expert-level (OCE) Certifications target specific Oracle technologies.

Let us have a look at some of the advantages of earning Oracle certification.

The Oracle certifications help you gain skills and knowledge that further lead to confidence and career security. The enhanced skill set will help you get the attention of your employer very easily. It also gives a better understanding and communication of the technology stack.

The Oracle certifications provide you knowledge that will help you stand apart in this competitive job market. The learned skills and technologies will increase the jobs for the present and the future as well.

Surveys have shown that 98% of the top 500 companies use Oracle software. Oracle certifications give candidates impressive skills and the ability to enhance standards of service and technology.

Check out our comprehensive learning resources to prepare for the certification exams. Good luck!

This year’s Stack Overflow Developer’s Survey asked 64,000 developers how they learn, the tools they use and what they need. According to the study, SQL is the second-most common programming language, utilized by half of all the developers in the world. Edgar F. Codd created the RDBMS while Donald D. Chamberlin and Raymond F. Boyce created SQL in the mid-1970s. Relational algebra and tuple relational analytics are the two types of mathematics that grew explicitly for relational databases on which SQL is originally based. Oracle SQL is easy-to-learn language compared to other languages. You can quickly get familiar with the predetermined number of functions used to run inquiries and return information. Even roles that are traditionally non-technical such as marketing, C-level executives, and specialized product managers are known to learn basic SQL through Oracle SQL 1Z0-061 certification in order to support their jobs.

With half of the world’s developers using SQL and RDBMS, it’s safe to say the language and technology are ubiquitous. Oracle SQL has become the basic language among developers these days because of its severity. Abilities and skills gained from SQL and RDBMS can transfer effectively between organizations and businesses, enabling knowledge and growth. Despite countless other database systems and technologies and their growing popularity, SQL databases have lasted 43 years and are undoubtedly here to stay – at least for the foreseeable future. With the arrival of big data, deep learning, and IoT, it wouldn’t be surprising if SQL databases thrive and expand for another 43 years.

Check out the three reasons why you need to choose Oracle 1Z0-061 certification.

1. Oracle SQL developers specialize in the design, implementation, and maintenance of structured query language (SQL) databases. They may act as a web developer that depends upon a particular position. This is one of the most crucial reasons as to why Oracle SQL 10-061 certified developers get paid handsomely. According to Indeed, an average SQL 1Z0-061 certified developer makes approximately $114,500, which is almost two times a middle-class family’s income.

2. When you recognize the database that stores the information you are using, SQL can answer your questions about data. You no longer need to rely on overly simplified, pre-built reports or co-workers to track down data. Oracle SQL allows you to become a progressively efficient and independent worker.

3. SQL questions can be saved and utilized again at any time. SQL code can also be edited with comments, so you can include clear descriptions directly in your query. With SQL code, you simply write the code once, save it, re-open it, and re-run it if you ever need to produce a report twice. Think of the hours – even days – that you could get back each month by not having to manually produce reports that could easily be automated.

So much of our business is digital now. Digital means data, data means databases, and, to access those databases, you need SQL. uCertify provides Oracle Database 12c: SQL Fundamentals 1Z0-061 course that provides the following resources along with the course:

Enroll in the uCertify’s 1Z0-061 course which offers complete coverage of the Oracle SQL 1Z0-061 exam objectives and enhances your SQL skills. As each individual in this world is a unique nature, so is each vendor-specific implementation of Oracle SQL. A database server is also a product manufactured by a large number of prevalent vendors. 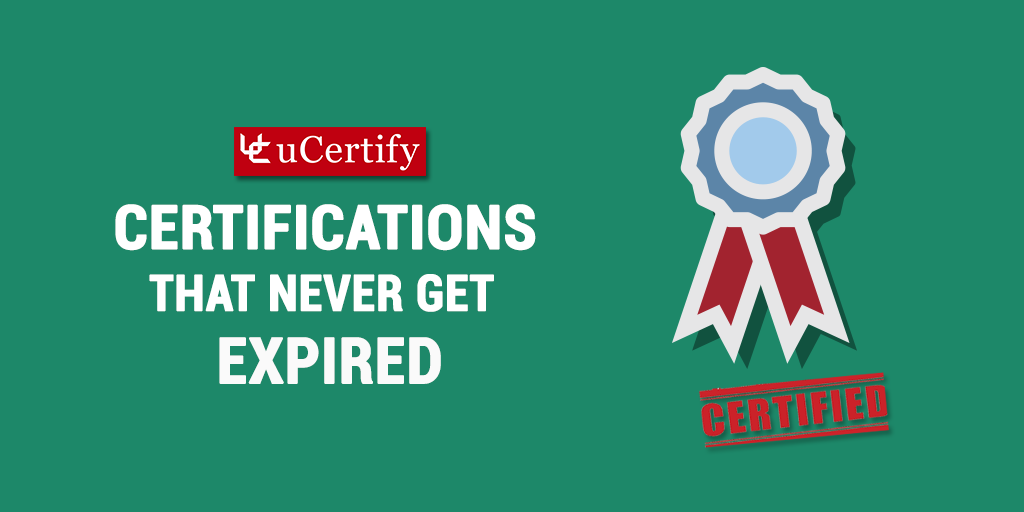 Certiport Certifications: Certiport is devoted to helping you prevail through certification. Their globally perceived certifications are intended for improving your efficiency, marketability, and esteem. Certiport delivers in excess of three million exams every year through the secondary, post secondary, workforce, and corporate innovation markets in 148 nations and 26 languages. Certiport has presented an extensive range of certification exams for entry-level to experienced experts. Certiport offers IC3 certifications with its two variables IC3 GS4 and IC3 GS5.

uCertify offers different test-prep, quizzes, exercises, performance-based labs, video tutorials, live-labs, and many other resources for the preparation of CIW, Oracle, and Certiport IT certifications.

Java Programming language is one of the most used and popular languages in the world of application development. The reason behind this is its properties like, platform independence, object-oriented approach, reusable code and dynamic classes. These properties make it one of the most preferred languages for programmers. The best thing about this programming language is that it is quite easy to learn and easily implemented, thus making it highly favorable in the programming community. After knowing about the qualities of the Java programming language, you must be thinking about learning this language. Having a certification in this language can open doors of success for you. Oracle Java SE7 1Z0-803 & 1Z0-804 certification exams are the ones that can validate your Java programming skills and help you get the attention of dream employer. 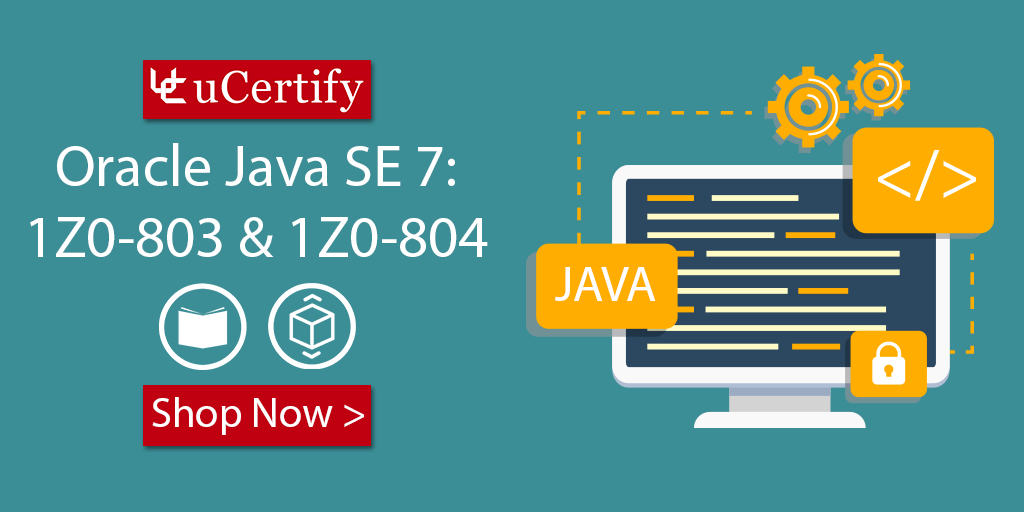 Our OCA/OCP Java 7 Programmer course covers the length and breadth of this platform-independent and object-oriented language that will help you learn and implement easily for programming purposes. The Oracle Java SE7 course covers the objectives of 1Z0-803 & 1Z0-804 exams and includes topics such as object orientation, operators, working with strings, arrays, and arrayLists and much more. Oracle Java SE 7 Programmer exam is designed to certify the competency of Java professionals in understanding, designing, and manipulating Java applications.

Here is what you will learn in the Oracle Java SE7 course:

Here are the learning resources included in the Oracle Java SE7 cert guide:

The 1Z0-803 and 1Z0-804 are a part of OCA/OCP certification. The exams are designed for the professionals who want to excel their career in the field of programming. The topics covered in the Oracle Java SE7 exams are as follows:

So, are you excited about preparing for the Oracle Java SE 7 certification? Get yourself enrolled in the uCertify cert guide and pass the Oracle OCA/OCP 1Z0-803 and 1Z0-804 exams in your first attempt. 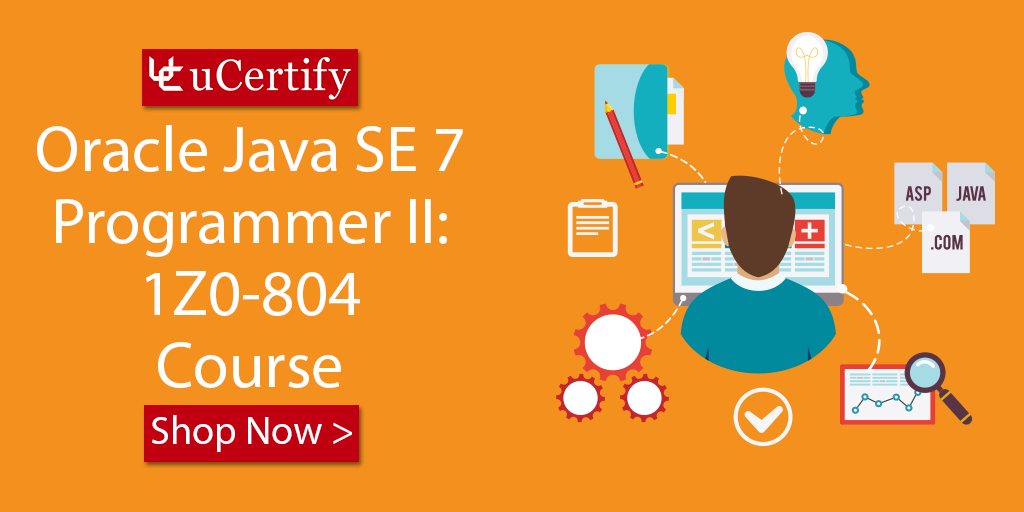 Are you thinking about starting a career in the field of application development? Then you should be master of programming languages such as Java, PHP, and a lot more. By far, Java programming language has been one of the most preferred programming languages that can be used in different platforms. If you are interested in learning Java programming language, you can boost your resume and grab the attention of your dream employer by getting certified by Oracle in Java SE 7. Oracle conducts three levels of OCJP certification exams that are 1Z0-803, 1Z0-804, and 1Z0-809. Start your prep for the Oracle Java SE7 certification exam with the Java SE 7 Programmer II course. The chapters and sections in this book map one-to-one to the exam objectives and subtopics. There are many features in this book designed to present the content in a smooth, example-driven flow to improve your reading and study experience. For instance, the chapters provide numerous programming and real-world examples to help you internalize each of the presented concepts. The following exam topics covered in the study guide:

The course comes with the following learning resources:

The 1Z0-804 exam comes under the Oracle Java SE 7 Programmer certification. This certification covers topics including the fundamentals of object-oriented programming, the steps to create simple Java technology programs, core Java APIs to design object-oriented applications with Java, and more. The 1Z0-804 exam is targeted at developers who want to validate their strong Java programming skills. The career prospects offered after the Oracle Java SE7 certification:

Excited about getting the Oracle Java SE7 programmer certification? Enroll in the uCertify Oracle 1Z0-804 study guide and start learning with us.