Mohammed Hadiulla is currently working as a Cloud Operations Engineer at iManage. He is a Certified Ethical Hacker and holds expertise in  Python and Powershell to automate tasks in both Windows and Linux environments.

He recently reviewed our CompTIA PenTest+ course and has provided the following feedback:

“uCertify CompTIA PenTest+ course offers full-length practice tests for the preparation of the certification exam. The quality of the course content and the Learning Management System is indeed impressive.

I really liked the number of flashcards and knowledge checks presented in each lecture. Furthermore, there are tons of practical examples that will not only prepare you for the certification test, but they will give you initial confidence to become a good professional.”

We are working on all the areas of improvement mentioned by him to provide a better user experience.

To know more about Hadiulla, you can contact him via his LinkedIn page.

Festus Odia is working as a Network Specialist at ATB Techsoft Solutions Limited and has more than 7 years of experience in the field of Networking and Information Technology. He is skilled in Network Administration, Internet Protocol Suite, Routing, and many more. Festus Odia holds the following certifications:

He has reviewed our Penetration Testing Fundamentals course and provided his valuable feedback:

“The uCertify course was crisp and gave me a good amount of knowledge on penetration testing concepts. I am happy to have invested my time in this course.

I was impressed and it worked better than my expectations. The course is really interactive and offers questions that are based on the certification exam objectives. This helps the users pass their certification in their first attempt.”

Thank you Festus, we are glad to have your honest and valuable feedback on our course.

To know more about Festus Odia, contact via his LinkedIn profile.

Victor Obosi is an experienced IT and Safety professional with industry knowledge in network security, programming, project management, troubleshooting, and more. He has also earned a number of certifications that include Understanding Cisco Cybersecurity Fundamentals , Cisco Certified Network Associate (CCNA Cyberops), Cisco Certified Network Associate (CCNA Routing and Switching), and many more. He is currently working as Freelance Network Engineer in Rexus Group. Recently he accessed uCertify Penetration Testing course and provided the following feedback:

“I have got an access to uCertify Penetration Testing course and found it to be fantastic. uCertify is a great place to learn new skills. I have completed the uCertify Pen Test course in 15 days. The course content is good and very easy to understand. The course comes with interactive learning resources for the certification exam prep.”

Thank you, Victor, for your valuable feedback!  It really feels rewarding when we get such customer feedback.

To know more about Victor, contact him via his LinkedIn profile.

Vinay Reddy is an experienced Information Technology Security Engineer with a demonstrated history of working in the education management industry. He is skilled in Vulnerability Assessment, Networking, Computer Security, Information Security Management, and Penetration Testing. Recently, he accessed the uCertify Penetration Testing Course and Labs. Check out his feedback below:

“One of the best things about uCertify Penetration Testing course is its comprehensive assessment feature. The test history and performance analytics module lets you review what you have been studying, how long you study and create a study planner. The study planner calculates whether you can hit your proposed exam date as per the amount of time you are putting in the exam prep.

The uCertify platform is easy to navigate and the e-book covers the 4 areas that will be tested in the exam. The course is a cost-effective way to study for the certification and I was impressed with the quality of materials.”

Thank you, Vinay for taking out time and providing valuable feedback. We are glad that you are impressed with the learning resource.

To know more about Vinay, contact him via his LinkedIn profile. 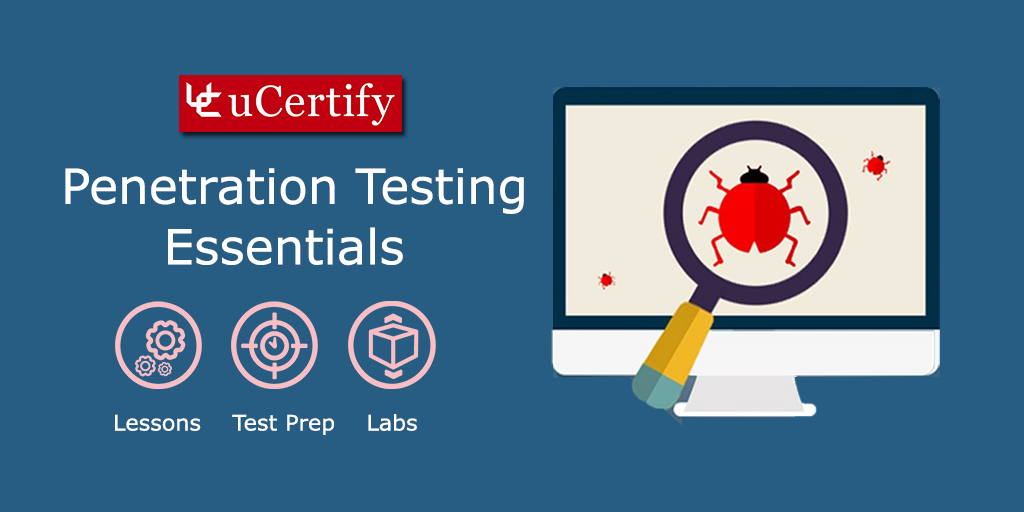 The procedure of Penetration Testing might be classified into five stages:

The process of collecting critical data on a target framework/system. This data can be utilized more readily to attack the system. For instance, utilizing open source web crawlers which can be utilized to discover information that can be utilized in a social engineering attack.

This stage uses specialized devices to facilitate the attacker’s information of the system like Nmap can be utilized to check for open ports.

Using the information accumulated in the Observing and Monitoring stages, the invader can utilize a payload to misuse the targeted system such as Metasploit can be utilized for attacks on revealed vulnerabilities.

This stage requires the steps to be involved diligently within the target environment keeping in mind the end goal to collect as much information as possible.

The attacker should clear any hint of invasion and exploitation of the targeted system, any sort of information assembled and keeping in mind the end goal to remain mysterious.

uCertify provides the certification course and performance-based labs for Penetration Testing. The objective of the complete study guide is to enable you to ace a repeatable, documentable Penetration Testing approach that can be utilized in an ethical Penetration. This guide has numerous benefits and after the completion of the course, you will gain expertise in hacking aptitudes that are exceptionally demanded and will set you up for the CEH, CPT, CEPT and the MPCS certifications.

The course helps you in network security by teaching you about the various penetration testing techniques. Learn the skills of pen testing with the Penetration Testing Fundamentals course and become an expert in this profession with uCertify.